PRIMARY, IMPORTANT DIRECTIONS FOR THOSE SEEKING REALITY AND THE TRUE RELIGION 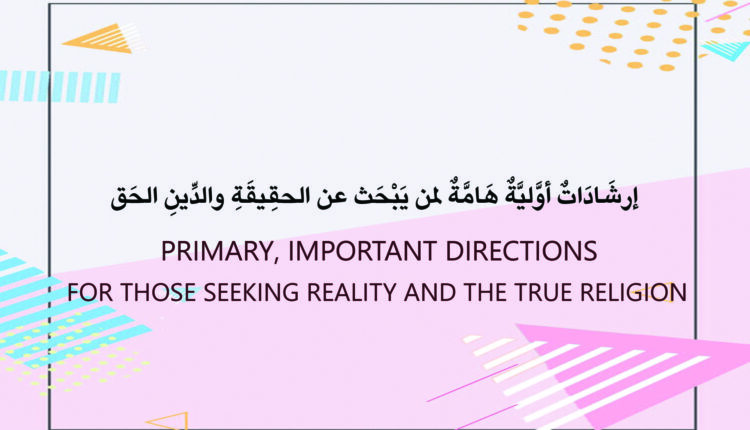 PRIMARY, IMPORTANT DIRECTIONS FOR THOSE SEEKING REALITY AND THE TRUE RELIGION

In the name of Allah, the Most Beneficent, the Most Merciful

Praise be to Allah, may peace and blessings be upon the Messenger of Allah

I have completed writing an article entitled “Primary, Important Instructions for New Reverts to Islam,” directed to those who entered Islam and are still new to it, regarding what steps they should take. As for this article, I am addressing those who have not yet reverted to Islam, and are still in the stage of searching for reality and the true religion, and those whose decisions are characterized by hesitation and fear of Islam. For them, I offer my most sincere advice in the following points:

2) All of the prophets and messengers from Adam (PBUH) to the seal of the prophets and messengers Muhammad (PBUH)—whose divine messages, despite difference in the revealed laws in a way befitting the time of the messengers and nations which preceded—had a single call: the singling out of Allah the Almighty as the only object of worship, and avoiding polytheism (shirk) and worshipping anything besides Him, the Glorified, the Almighty.

3) All of the messengers believed in each other, and all of them believed in and gave glad tidings of the prophet Muhammad (PBUH).

4) The shortest path for you to attain reality and knowledge of the true religion, and to tread the straight path by which you attain protection and safety in both this world and the hereafter, is to accept the Noble Quran with impartiality, contemplation, and an open mind, as it is the speech of Allah the Almighty who has revealed it upon His slave and prophet Muhammad (PBUH), and it is the extended rope of Allah from the sky to the earth. Thus, you will find that in it, Allah the Almighty Himself—the possessor of the beautiful names and the highest attributes—is addressing you, and speaking to you, and answers all of your questions, and all (thoughts) that wander in your soul for which you search. If you do this, Allah will never abandon you.

5) Do not permit the biased and malevolent media—which propagates false narratives against the Noble Quran and Islam, the Religion of Allah—create a barrier between you and the truth, making it difficult for you to rid yourself of its power and effect over you. This cheap, hateful, and untrue method (of portrayal) taken by the modern mass media today has been adopted by the leaders of shirk, enemies of the prophets and messengers through various methods, in order to ward people away from paying attention to and following the truth.

That is, ‘so that you may overcome the Noble Quran, and weaken its effect on the people.’ The malicious media today matches the description “speak[ing] noisily.”

This is a part of an argument that will occur on the day of judgement, between those who followed and those who were followed, between the weak and the powerful and arrogant, between the general population and the leaders of the polytheists—what use will their argument be?

6) Expel, as much as you can, the pressure and compulsion that surrounds you. Do not learn about Islam from the enemies of Islam, as this will misguide you, and lengthen your path: in fact, you may not even arrive at guidance, or learn about the true religion. Islam is taken from two sources, the Noble Quran, the speech of Allah, and the purified prophetic Sunnah, which is every act, statement, and tacit approval of the Prophet Muhammad (PBUH) that is authentically established, as can be found in Sahih al-Bukhari and Muslim, and other books of hadith (reports).

7) Know that the revealed laws of Islam encompass all aspects of life. In the beginning, do not toil over researching the specific, detailed rulings of the law, and the reasons for their (legislation): why did Allah prohibit alcohol? Why has the flesh of pigs been prohibited? Why is the hijab required of women? Why is there purification and ablution? Why is there prayer? Why is interest prohibited? —asking why, why? In the beginning, this is not a fruitful endeavor. It will lengthen your path, and keep you engaged with infertile debates, resistance and objections without any use, and you may be misguided, or branch off into other paths.

Rather, your first and foundational concern should be, in the beginning, to research issues that are general, universal, and comprehensive: why did Allah the Almighty create creation? What is the purpose of our existence in our worldly life? Then, what will happen after we die? What is waiting for us? What is our destination? Is Allah true? If He is true, then what is His claim over His slaves? —or did Allah create us frivolously without any purpose and no revealed law to guide us? Then, how is it possible this right can be known? What is the correct way to know it? Are the prophets and messengers true? What is the necessity and need for their existence? Then, what rights do the prophets and messengers have over us? If you arrived at the correct answers to these comprehensive and universal principles, and you believe and affirm them, it will be easy for you after this to understand and believe, and to practice those detailed actions of worship!

8) Know that there is no compulsion in religion. Allah the Almighty is Himself the most loved, and he does not accept that his slaves worship Him under compulsion or with hatred. It is rather required to worship Him lovingly with obedience and contentedness, without hatred or compulsion,

The true meaning of this verse, however, should not cause you to delay, procrastinating in the duration of contemplation, searching, and hesitation to months and years, in the name and impression of searching for the Truth and reality; for you have no control over time, and death can overtake you at any moment, even if you are still in the stage of searching for reality, making you die as a disbeliever and polytheist! You will regret it, and a regretful day will certainly come!

9) We will not sugarcoat it, nor lie to you; whoever dies upon disbelief, polytheism, and belying Allah, his destination is the fire for all eternity, regardless of any righteous acts that he undertook.

In the hadith, it is authentically narrated that the Prophet Muhammad (PBUH) said: “By the one in whose hand is Muhammad’s soul (God), there is not a single person in this nation, Jew or Christian who hears of me and then dies without having believed that which I was sent with, except that he will be a companion of the Fire”. This meaning is proven in tens of passages in the Quran and Prophetic Sunnah, and all of the prophets and messengers of the past agreed upon this.

10) It is possible that you dread or fear the reaction of those around you—your family, friends in places of work, and others—and that you allow this to deviate you from faith and entering Islam, or from announcing your Islam publicly. Satan is making you fear the people around you, while Allah the Almighty is more deserving of your fear and attention!

The Truth has a tax, just as falsehood has its tax. The tax of falsehood in this world is a poor life, constriction of the chest, depression, destruction, worry, and fear of the unknown—and in the hereafter, the anger of the Lord, the Glorified and Almighty, and eternal residence in the fire of hell. On the other hand, the tax of the Truth, as great as it may be, is followed by tranquility and peace in the soul, comfort of the mind, a happy life, easing of the chest, purity of the body, and harmony, agreement, and brotherhood between the body, mind, and soul—and in the hereafter, the contentedness of the Lord, the Glorified and Almighty, and eternal residence in paradise and its bliss. Know that whoever pleases Allah the Almighty by (earning) the anger of people, Allah becomes pleased with him, and makes the people pleased with him. And whoever pleases the people with hatred of Allah, Allah is angry with him, and he angers the people (against him). The reasonable person is the one who makes the best choice.

11) Do not take the wrongdoings of some Muslims as evidence of Islam being wrong, or an evidence of its falsehood, as this will carry you to oppression, hostility and disagreement towards Islam, and will make you flee from it. You will be misguided and will misguide others. Nobody represents Islam completely and absolutely except one single individual, the Prophet Muhammad (PBUH), and everybody besides him both errs and does good. It may be said to them: ‘you have committed an error,’ or ‘you have acted correctly,’ ‘you have done well,’ or ‘you have done poorly.’ Know that the Truth is not known by men, but rather, men are known by the Truth, and the Truth in this case is limited and restricted to ‘Allah said (such as such)’, and ‘The Messenger (PBUH) said (such and such)’, i.e., the Noble Quran, and the Sunnah of the Prophet Muhammad (PBUH).

12) In conclusion, I recommend that you supplicate, withdraw from your desires, and to ask Allah with all honesty to show you the Truth as truth, and to bestow upon you your following it; and to show you falsehood as falsehood, and bestow upon you your avoidance of it. If you do this after half the night has passed, and you are in a position of prostration to Allah, that would be best, as Allah is near you, He hears and sees, and nothing passes without His knowledge: you require no intermediary between Him and yourself, and the time a slave is nearest to his Lord is when he is prostrating:

The Messiah, Jesus , the Son of Mary From the Cradle to the Grave as in the Quran and…